This blogpost originally appeared in timesandseasons.org on Jan. 5, 2018.
By Jesse David Hurlbut 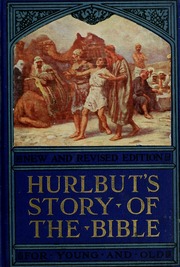 Jesse Lyman Hurlbut, a Methodist minister, first published the Hurlbut’s Story of the Bible in 1904. In the book, he retells 168 Bible stories in simplified modern English prose. The author’s purpose was to provide a version of key scripture passages that young readers would find accessible. The numerous republished editions that have appeared throughout the years witness to the popularity of the volume.

The author is a distant cousin in my family tree, but because of the similarity between his name and mine, I have always perceived a personal connection to his life’s work. In honor of his project, I would like to apply my training and scholarship in medieval literature and culture in order to describe a handful of late medieval versions of the Bible that likewise sought to make the understanding of the sacred text more widely accessible. The earliest copies of these texts predate the popular use of the printing press and were originally reproduced by hand. The number of surviving copies confirms the popularity and the appreciation of these precious objects. In what follows, I propose a story of several Bibles.

The Glossa Ordinaria (Ordinary Gloss) does not summarize or rephrase the biblical text but appends lexical and interpretive commentary to the full canonical transcription of Jerome’s Latin Bible (the Vulgate). The biblical text proper was presented in a block in the center of each page in a large, bold hand. Short annotations were added between the lines while longer commentaries filled the wide margins surrounding the text, all in a smaller script. The glosses evolved over time, but were standardized by the twelfth century. According to Beryl Smalley, the commentary “compiled, in fact, a representative selection of extracts from Fathers and masters from the third century to the early twelfth” (Beryl Smalley, The Study of the Bible in the Middle Ages, 3d ed., Oxford: Basil Blackwell, 1983, 66. See fuller discussion on pages 52—66).

The creative use of page layout allowed the canonized text to be fully surrounded by annotations. The Glossa commentary included, among other things, the study of biblical typologies. These typologies indicated connections between the stories of the Old Testament and episodes in the New Testament. For example, Moses, raising the brazen serpent on a stick to heal the children of Israel from their snakebites (Numbers 21:6-9) prefigures God the Father raising Jesus Christ on the cross to save humanity. This particular type is well known to Latter-Day Saints since it is explicitly taught in the Book of Mormon (Alma 33:19-22; Helaman 8:14-15, see also John 3:14-15). The Glossa, however, identifies dozens and hundreds of typologies, providing a consistent interpretive layer for the whole biblical text.

In the gloss to Isaiah Chapter 11 (Fig. 1), the root of Jesse and the tree that grows therefrom is interpreted not only as a prophetic depiction of the lineage of the Messiah from Jesse through David and down to Mary, but also as a type and shadow of the Crucifixion of Christ who is raised up on a “tree.” Thus, a single passage of scripture foreshadows both the birth and the death of the Savior.

The Speculum Humanae Salvationis (The Mirror of Human Salvation) organizes a small selection of Biblical and traditional stories into typological groups or chapters. Each of the 45 chapters is made up of three Old Testament stories that serve as types prefiguring one New Testament story. Typically, the page layout allowed all four related stories and the accompanying illustrations to appear side by side on a double page opening. The stories are short summaries that presuppose a prior familiarity with the originals. The emphasis in the text is the explication of the typological foreshadowing. Originally composed in Latin in the thirteenth century, the Speculum Humanae Salvationis was translated into many languages and hundreds of copies have survived.
For example, in Chapter 16 from a fifteenth-century manuscript in the French National Library (Fr. 6275, fols. 17v-18r), the first scene illustrates the Last Supper of Christ (Fig. 2). The sacramental meal is foreshadowed in three typologically related scenes. The first relates the collection of manna from Heaven (Fig. 3).

In the second, the children of Israel eat the Paschal lamb (Fig. 4), which God commanded them to eat “when he delivered them out of captivity from the Egyptians, just as Christ instituted the first Holy Sacrament when he sought to deliver us out of the power of the devil.”

In the third typological scene, the High Priest Melchizedek greets Abraham with bread and wine (and even a basket of grain for his horse–Fig. 5). The text explains that “For this reason, each priest is called after the order of Melchizedek because the Holy Sacrament was prefigured by the oblations of Melchizedek.”

A similar body of typological relations are compiled in another collection referred to in modern times as the Biblia Pauperum, or Bible for the Poor. Given the cost of books in the middle ages and the Renaissance, it is unlikely that these volumes actually served the poor directly. The earliest manuscript versions of this text also date to the thirteenth century and were similar to the Speculum Humanae Salvationis. Each of the 40 chapters originally comprised three or four pages of text accompanying a group of images arranged as a triptych in which two Old Testament stories prefigure one New Testament story. The portraits of prophets along with scriptural quotes from their writings accompany the visual display. Over time, the descriptive text was reduced to short captions for the illustrations, which became a popular sequence published on their own in early printed block books. In a fifteenth-century manuscript from the Heidelberg University Library (ms. Cod.Pal.Germ. 148, fol. 162v), the day of Pentecost is represented in the central panel by a dove alighting on Mary and the Apostles (Fig. 6).

As illustrated on this page, this event was foreshadowed by the apparition of God to Moses in a bush that was not consumed by fire. According to the summarized text, God presented Moses with the Old Law on tablets of stone, prefiguring the gift of the New Law inscribed in the hearts of the disciples on the day of Pentecost. Similarly, Elijah called upon God to accept his sacrifice and God responded by sending fire from Heaven just as tongues of fire were sent to purify the New Testament disciples. Verses from David, Ezekiel, Joel, and the Book of Wisdom provide textual substantiation (See Vulgate Psalms 103:30 “Send forth your Spirit and they shall be created”; Ezekiel 36:27;Joel 2:29; Wisdom 1:7 “The Spirit of the Lord has filled the whole world”).

In a widely-reproduced blockbook version of the Biblia Pauperum (Fig. 7), the scene in which the Resurrected Christ steps out of the sepulcher is accompanied by images of Samson escaping from Gaza by breaking down and carrying away the city gates (Judges 16: 1-3); and Jonah exiting from the mouth of a fish (Jonah 2:10). The textual commentary clarifies the relationship between these two Old Testament figures and Christ having broken the doors of death and emerging after three days in prison.

The most elaborate and luxurious expansion of the medieval Bibles is the Bible Moralisée (Moralized Bible). Every single episode from the Bible is conveyed in one or more illustrated medallions, each accompanied by a short caption. Each medallion is also paired with a typological or moralized interpretation in a medallion with an accompanying caption (Fig. 8).

The first copy of the Bible Moralisée (first quarter of the thirteenth century), covered only the narrative portions of the Old Testament: Genesis through 2 Kings and included over 1000 medallions or miniature illustrations. Subsequent versions ambitiously took on the remaining prophetic and poetic books of the Old Testament and the entirety of the New Testament, reaching up to 1900 illustrations. (In order to avoid repetition, the four Gospels were treated as a single book called The Gospels.)

In one fifteenth-century copy of the Bible Moralisée, for example, the story of the baby Moses being hid in a basket among the bulrushes and found by Pharaoh’s daughter is related in four pairs of illustrations. The first of these depict Moses in a basket being placed into the river. The captions (in both Latin and French) compare the dangers that the infant Moses is exposed to with the Christ child exposed to a world of tribulation as He lays in the manger in the Nativity scene (Fig. 9).

In the Book of Numbers, chapter 13, Moses sends a team of spies into the land of Canaan. They return with a cluster of grapes so large, they must carry it on a stick between two men. In a fourteenth-century copy of the Bible Moralisée, the grapes hanging on a stick are compared to Christ hanging on a cross. Implied in the comparison is the notion that the grapes will be pressed into wine which serves as a type for Christ’s shedding of blood (Figs. 10-11)

The comprehensive examination of the types found in the Old Testament that these moralized projects present, makes them a valuable resource for understanding how individual passages of scripture were taught and understood in this period. For instance, when Ezekiel describes his vision of the sticks of Judah and Joseph being held in one hand (Ezekiel 37: 16-17), the medieval interpretation is that one faith and one baptism will bring all people together. A thirteenth-century illustration shows a group of people being baptized together in the same font (Fig. 12).

The story that these Bibles tell is about the value of the Old Testament as a source of understanding of the life and mission of Jesus Christ. The popularity of each of these variations of the Bible throughout the later Middle Ages led to the widespread appreciation of biblical foreshadowing. The combined study of the Old and New Testaments through the narratives that bound them together was widely preached in sermons. The illustrations in these volumes were copied and imitated in wall painting, sculpture, stained glass, and even in dramatic stage performances and pageants. Unlike literary or poetic foreshadowing which aligns parallels between contrived events and imagery, the notion of Biblical types and shadows celebrates God’s foreknowledge by observing the harmony between otherwise disparate historical events. We can clearly see from these examples that the understanding of the Old Testament was never isolated from a comprehension of the New Testament.